I confess: I’m a doodler. Doodling gets a bad rap, but it can be a useful exercise for generating ideas. The cover and text designs of University of Georgia Press books are produced on computers, but ideas start forming before we designers ever sit down at our screens, and for some of us, myself included, sketching is an important stage in the design process.

I graduated from the University of Georgia art school the quarter before the graphic design department got its first computer lab. My training goes back to the days of tracing type, creating marker comps, and using press type. The process of doing thumbnail sketches was drilled into us students by our professors. In the stairwell of the graphic design building, a neon sign commanded us to “Do More Sketches.”

There is something about putting pen or pencil to paper that gets the creative juices flowing. It’s a way to quickly explore multiple concepts and narrow down the ones worth pursuing. I find it easy to discard ideas that don’t work because I haven’t invested a lot of time developing them. Sketching is also helpful for working out composition and type arrangements. The sketches are rough and hastily drawn. The point is to get a lot of ideas down on paper without getting bogged down by details. Below are a few examples of sketches that became reality.

And please don’t judge the chickens in the Vegan Studies Project doodles.

Click on any image below to see full-size images with captions and begin the slideshow: 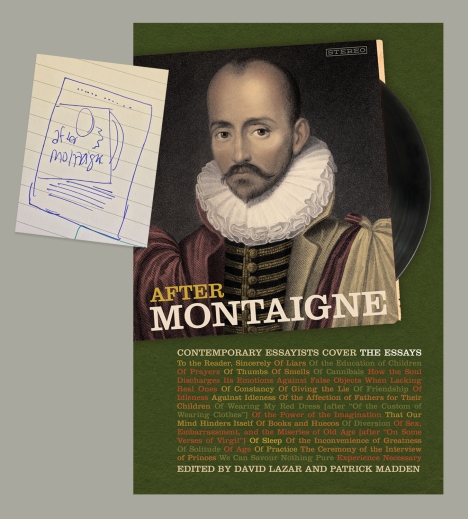 For the cover of AFTER MONTAIGNE: CONTEMPORARY ESSAYISTS COVER THE ESSAYS, editors David Lazar and Patrick Madden suggested the idea of a “greatest hits” album and provided vintage album covers as references. I found a stock photo of a record coming out of its sleeve, and did some doodles to see how I could incorporate a portrait of Montaigne onto it. The finished cover design looks very much like the sketch.

My sketches for MAPPING REGION IN EARLY AMERICAN WRITING, edited by Edward Watts, Kerri Holt, and John Funchion, show me puzzling through the concepts of writing, mapping, and region. I liked the shapes and symmetry of the sketch in the lower right corner, so I fleshed out that idea with details from historic maps and snippets of the literature discussed in the book. The black background is an old cloth book cover.

This sketch shows some ideas for the text design of SOUTHERN TUFTS: THE REGIONAL ORIGINS AND NATIONAL CRAZE FOR CHENILLE FASHION, by Ashley Callahan. I wanted to open the book with a photograph showing the glamorous side chenille fashion. The sketch shows an idea I had for using stitching or tufting as a decorative element that developed into a stitched rule that appears throughout the book.

Several ideas for the cover of THE VEGAN STUDIES PROJECT: FOOD, ANIMALS, AND GENDER IN THE AGE OF TERROR arose out of thought-provoking conversations with colleagues at the Press and suggestions provided by author Laura Wright. These sketches and notes show my brainstorming process. The final design didn’t emerge from these sketches, but making thumbnails helped me organize my thoughts about the cover. I was able to hone in on the idea of representing animals as commodities rather than living beings.

2 thoughts on “From Doodle to Design”