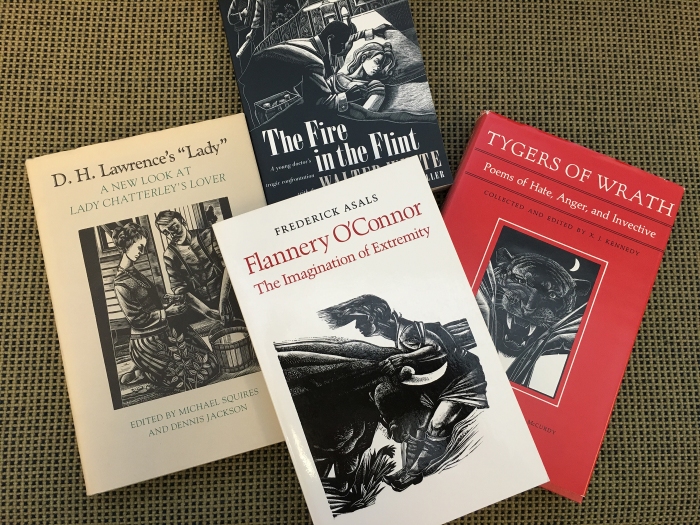 The University of Georgia Press was saddened to learn that illustrator, author, and publisher Michael McCurdy died on May 28. McCurdy’s wood engravings and scratchboard illustrations appeared on several Press books. His masterful cover and interior illustrations for A Childhood, by Harry Crews, poignantly portrayed Crews’s hardscrabble first six years in rural Georgia and Florida. McCurdy’s work appears on the covers of Flannery O’Connor: The Imagination of Extremity, by Frederick Asals; Tygers of Wrath, by X. J. Kennedy; Fire in the Flint, by Walter White; and others. Below Sandy Hudson, the Press’s design and production manager from 1980 to 2005, remembers Michael McCurdy. 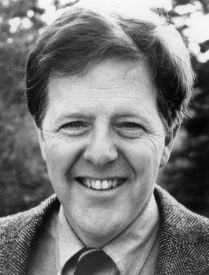 I was so lucky to have known Michael McCurdy professionally and to have collaborated with him on several UGA Press books and a poster for the announcement of the Flannery O’Connor short fiction series. Additionally, on one delightful occasion, my husband, Cecil, and I visited with Michael and Deborah at their home, studio, and workshop in Great Barrington, Massachusetts.

By his own account Michael fell in love with relief printing (letterpress printing/woodcuts) very early in life. I’m not an illustrator or artist of any kind, but I think wood engraving must be the most arduous, rigorous, and painstaking method of illustration. Carving into hard wood is physically demanding. It’s also fraught with “danger.” One bad slip of the hand and many hours of work are lost. The block is ruined, and one must start over. Moreover, the wood engraver must think and visualize in reverse because the areas that the artist cuts out of the wood will print as white not black as one would think. It’s not like putting pen to paper when one doodles or makes a drawing.

Michael McCurdy was a master of expressive wood engraving and wood-engraving techniques. I believe he will be remembered as one of the most prolific and best of his generation of American artist–wood engravers. Michael was able to “bring into the light” the essence of a scene or situation, be it pathos, humor, connection, stasis, or conflict. A humanist and a deeply generous human being, Michael knew what he wanted to give expression to in the illustration—what he could offer that would touch the heart and give readers a picture to enlarge their appreciation of the author’s words—even symbolism. Mrs. May in Flannery O’Connor’s story “Greenleaf” is not just killed by the bull, she is also lifted up by and carried away. In Michael’s illustrations I can feel the force and the mystery of that fatal encounter. Also, I could tell Michael about something he had never experienced–something like noodling—that is capturing catfish by hand while standing chest-high in alligator-and snake-inhabited blackwater rivers of the southern United States—something I myself had never done but only read about—and Michael would somehow see how this might look and make it come to life. In my role as the art director, I could tell Michael that the trees weren’t quite right in his preliminary sketch for that illustration—that the trees along rivers and swamps in the South are not big firs and hemlocks but rather such and such, and Michael would try again. He would make as many alterations as requested BEFORE he started carving the block. No time clock. No additional charges. Michael did not do what he did for money. He did it for love.

Artist, wood engraver, printer, publisher (his own Penmaen Press), and writer, Michael spent his entire professional life in the service of literature and art. He did so lovingly, joyfully, and humbly. As with most people who work together to make books, he was deeply collegial. Most important, he truly served literature and his own deep convictions, loves, and gifts.

Herb Lubalin, a famous twentieth-century American graphic designer said: “Typography is a servant–the servant of thought and language to which it gives visible existence.” I am sure, that by extension, Mr. Lubalin would have included all the book arts, including book illustration, in this statement. Michael’s illustrations will continue to delight and to edify for as long as the books he contributed to remain in print.

Below are a few examples of McCurdy’s wood engraving illustrations

Sandy Hudson was Design and Production Manager at the University of Georgia Press from 1980 to 2005.