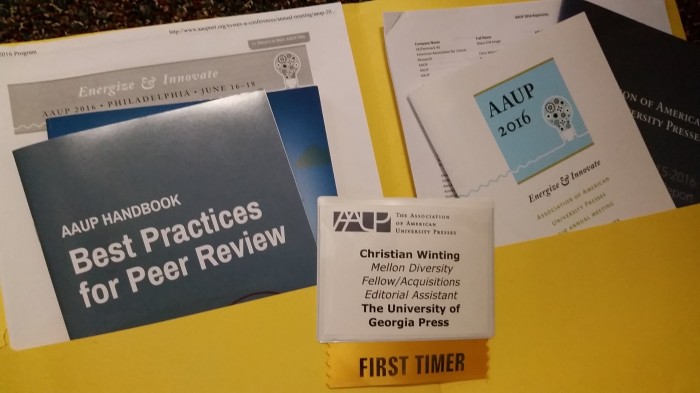 The welcome and information folder for the 2016 American Association of University Presses Annual Meeting in Philadelphia, PA, at the Loews Philadelphia.

As I sat in the Atlanta airport watching the minutes tick by, my anxiety inched higher and higher. I was due to land in Philadelphia for the 2016 Association of American University Presses annual conference at 3:00 p.m. and waltz over to the Loews Hotel for the newcomers’ reception. There I was scheduled to meet the other three Mellon University Press Diversity Fellows, their mentors at Duke, MIT, and Washington University Presses, and what I assumed would be a few other young editorial assistants and some first-time conference attendees. My landing delayed two hours, it would be a miracle if I could catch the last fifteen minutes of the reception before we were whisked away to the Barnes Foundation for a larger gathering. I landed in Philadelphia, ran outside to grab a cab, and quickly stashed my bags with the hotel staff before taking slow and deep breaths in the elevator to the thirty-ninth floor, or however ridiculously high that amazing view was. I stepped out and turned the corner into a sea of people, all laughing, drinking, and chatting loudly.

I could not think of a more emblematic scene to share about my first foray into the academic publishing industry. That first night I met so many interesting and impressive individuals, all of whom had nothing but warm and welcoming words. This profession, which seems to be so closely knit, fosters camaraderie despite the inherent competition between the presses. As I went from session to session, different individuals would stand up and share their best practices and insights to spur their colleagues’ development. It is truly an incredible thing to see. Even in less formal settings, there was a strong friendship. I went to dinner with three senior editors from three different presses, and the trio acted as if they were old college buddies reuniting. Naturally, I am excited to form similar relationships.

Equally incredible is the commitment to increasing diversity and innovation in the university press setting. It’s true that each time I walked into a room I saw mostly older white men and women. There was the occasional person of color, but she was in the minority by far. Nevertheless, the organization and its members are aware of this imbalance, and they are taking active steps to encourage and foster a diverse workforce. Editor Chris Jackson, who has worked with Ta-Nehisi Coates and is the new vice president and editor-in-chief of Random House’s One World imprint, gave an inspiring lunchtime talk on his start in publishing and ways that presses can do more to increase their diversity. Upon introducing myself to others, I was often asked how the fellowship was going and told that so-and-so university press wants to follow the Mellon Foundation and the four partner presses in their endeavors. Diversity is on the mind of AAUP because with a diverse membership will come more diverse scholarship and deepened discourse on how we understand our past, present, and future.

Changes are afoot! Whether they involve making its membership more inclusive and considerate of academic publishers or adopting new best practices for peer review—a hallmark of the association—AAUP is not resting on its laurels. It is actively assessing and examining itself and its standing in the industry and is changing accordingly. These are encouraging steps toward the organization’s stated goal of increased diversity. If the association is willing and able to change once it has set a goal, then its stake in diversity carries more weight than the oft-heard cries of well-wishers who lack the conviction to follow through. Not these editors. I am excited to see just how far we can go.

Christian Pizarro Winting is the 2016 Mellon University Press Diversity Fellow and an Editorial Assistant for Acquisitions at the University of Georgia Press.