Welcome to Short Takes. Below you’ll find all the news, interviews, events, and reviews that you might have missed or can look forward to in the coming months.

Judith Ortiz Cofer, author, educator, member of the Georgia Writers Hall of Fame, and friend of the Press, passed away on December 30th. Over the years we published many books by Cofer and cherished the partnership and friendship. A remembrance by UGA Press Director Lisa Bayer can be found here. The University of Georgia community will honor the life of Cofer on Friday, January 27th at 3:00 pm in the Chapel on UGA’s campus. A reception will follow at the Demosthenian Hall. Additionally, a tribute panel is planned on February 10th at the Association of Writers & Writers Programs Conference titled “Judith Ortiz Cofer —Woman in Front of the Sun,” named after one of the author’s works. More information can be found here.

Madison County gained its first canoe launch along the Broad River dubbed “Briar’s Landing” in honor and in memory of Oglethorpe teen Briar Newsome, who loved to spend time canoeing on the river with his dad. Maps and information from the Broad River User’s Guide by Joe Cook was used in determining the location for the launch. Find out more about the new launch and the story behind its creation here.

The poem “Record” by Daniel Schoonebeek, author of Trébuchet, was published on Buzzfeed. Read the poem in its entirety here. The University of Georgia Press will be at the Association of Writers & Writers Programs Annual Conference and Bookfair from February 9-11 and will have various author signings at its Booth #228. See below for details. And let us know if you plan to drop by on our Facebook events page.

The city of Columbus is preparing to celebrate the February 2017 centennial of Carson McCullers’ birth with an exhibition entitled The We of Me. Using original documents and artifacts from the collections of the Columbus State University Archives and the Carson McCullers Center for Writers and Musicians, The We of Me examines McCullers’ childhood in Columbus, her circle of friends in New York, and the influence of these two different worlds in her writing. Much of the material will be on public display for the first time, including correspondence, photographs, and other items meticulously cataloged by the late Dr. Mary Mercer, McCullers’ psychiatrist and close friend who lived with the author for years. More information can be found here. The UGA Press published The Lonely Hunter: A Biography of Carson McCullers by Virginia Spencer Carr which serves as the definitive chronicle of McCullers’ tumultuous life and major literary talent.

On February 21st at 7:00 pm the University of Georgia Creative Writing Program, with the University of Georgia Press, is pleased to present a reading by Christopher Salerno, winner of the 2016 Georgia Poetry Prize. Salerno’s collection, Sun & Urn, features poetry that pushes beyond the tragedies of loss to the wilder realms of renewal and meaning. Reading alongside Salerno is poet Daniel Schoonebeek, whose collection of poems Trébuchet was published by the UGA Press in 2016. The reading will take place at Ciné, 234 W Hancock Ave, Athens, GA 30601, and is free and open to the public.

Buddy Sullivan, author of Sapelo: People and Place on a Georgia Sea Island, will be hosting an open house on March 12th from 3:00-5:30 pm in Darien, GA. The event will feature books for sale and a slide program by the author. Due to the constraints of space limitations, reservations for seating will be required through the Ashantilly Center website 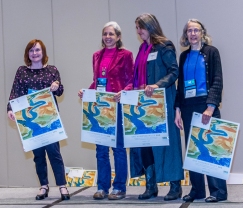 The Wormsloe Foundation Nature Books series, an imprint of the University of Georgia Press, has been named as an honoree of the inaugural One Hundred Miles 100 for its contribution to the preservation of the Georgia coastline.

One Hundred Miles is a 501(c)3 coastal advocacy organization with a mission of protecting, preserving, and enhancing the 100-mile Georgia coast. Led by a dedicated staff of five and a committed seven-member Board of Directors, One Hundred Miles focuses on core issues of water and wetlands, land use, changing climate, and wildlife.

“Owing to the extraordinary books in the Wormsloe Foundation Nature series, tens of thousands of readers now better understand the critical importance of protecting the Georgia coast and, by extension, the importance of all coastal ecosystems,” said Director of the University of Georgia Press, Lisa Bayer. “The University of Georgia Press and the Wormsloe Foundation are deeply honored by this recognition of our environmental publishing program.”

Ladies Night at the Dreamland by Sonja Livingston has been named one of the best nonfiction books of 2016 by Kirkus Reviews. In the book, Livingston explores the lives of some of America’s most interesting and obscure women. Included are Alice Mitchell, a Memphis society girl who murdered her female lover in 1892; Maria Spelterini, who crossed Niagara Falls on a tightrope in 1876; May Fielding, a “white slave girl” buried in a Victorian cemetery; Valaida Snow, a Harlem Renaissance trumpeter; a child exhibited as Darwin’s Missing Link; the sculptors’ model Audrey Munson; a Crow warrior; victims of a 1970s serial killer; the Fox Sisters; and many more.

Gorham revisits her rebellious teen years in a remote Swiss boarding school with a deft authorial hand, blending the internal reflections of a bildungsroman novelist, the technical writing of a mountain geologist, and the outsider observations of a travelogue writer. She traffics in well-worn psychological terrain: dreams, her quest for a suitable mother figure, and most prominently, the elusive longing, or Sehnsucht, that permeates the whole book. . . Half a century removed from her experiences at school, she is as unflinching with herself and those who helped shape her as she is in describing the foreboding, brutal beauty of the Alps.”

This collection offers something for every reader, whether one seeks the calm of a contemplative voice or the catharsis of anger. Lengths of essays vary widely, too: one writer offers a terse yet poetic recollection of childhood, horror, and love in the space of a page and a half. Another writer unravels a lengthy and wide-ranging exploration of pain and women’s relationship to it. It’s all here, just as it should be: birth, death, sex, longing, regret, anger, love.”

“For hundreds of years only men had access to the printing press, education, and platform. So while women and people of color and gender non-conforming writers catch up, a space to thrive, flourish, and gain airtime is essential. Woolf demanded for women a room of our own. Now we have a book of our own.”
—Gila Lyons, Bust

LISTEN: Interview with Marcia Aldrich on the New Books Network

To Live and Dine in Dixie
Angela Jill Cooley 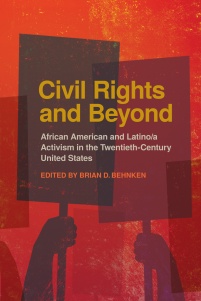 Over the last two decades, the history of civil rights has evolved from the story of the civil rights movement to the story of civil rights movements. Behnken’s collection of essays is a valuable addition to this approach. Rejecting the traditional cooperation/conflict narrative, the contributors chose the concept of political activism as the catalyst to examine the complex but rich relationship between African Americans and Latinos…The result of this approach provides a more nuanced understanding of the relationship between groups such as the Black Panthers and the Young Lords Organization, the political coalition that led to the successful mayoral campaign of Harold Washington, and the strained relationship between the black and Cuban communities in Florida.” 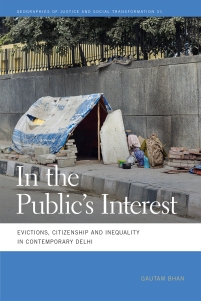 In the Public’s Interest
Gautam Bhan

This masterful book by Bhan not only opens up a range of new questions for critical urban theorists, it also offers a method of inquiry which begins with a case, embedded in a context, in ‘place’, and uses this as a lens to suggest perspectives on cities elsewhere. This is just one step in a process of building southern urban theorising: the insights do not take the form of a generalised model or concept applicable anywhere, rather they raise issues and questions which can be tested elsewhere and refuted, supported or elaborated. This will be a book of considerable value to urban and planning researchers, academics and students and particularly those interested in global South cities and critical urban theory.”