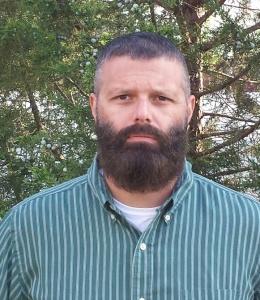 Collins earned his MFA in creative writing (poetry) at Murray State University. He is a former captain in the U.S. Army (Reserve), having served twelve years. He completed three overseas combat deployments in Afghanistan and Iraq as a platoon leader and as a commander. He has published one poetry chapbook titled Gathering Leaves for War (Finishing Line Press, 2013).

Collins is currently a PhD student in literary nonfiction at the University of Cincinnati, having left the world of teaching high school English. He is married to his high school sweetheart, and they have two children. They live in the rural town of Independence, Kentucky. My American Night will be his first full-length poetry collection to be published.

“Seldom have I ever read such a brutally honest depiction of warfare. Chris Collins does not shy away from the painful complexities but lets the mysteries shine through. In a voice both original and completely honest, he reveals the deep paradoxes of the human spirit. This is a powerful collection of poems,” said this year’s judge, David Bottoms, the John B. and Elena Diaz-Amos Distinguished Chair in English Letters at Georgia State University and former Poet Laureate of Georgia (2000–12).

The inaugural judge for the Georgia Poetry Prize, Thomas Lux, who was the Bourne Professor of Poetry and Director of Poetry at Tech at the Georgia Institute of Technology, passed away on February 5, 2017, after a long illness. The UGA Press and its partners owe a debt of gratitude to Lux for his instrumental role in the launching of the Georgia Poetry Prize, his influential role as a writer and teacher, and for his decades-long dedication to the arts community in Georgia.

Interested parties for next year’s prize may consult the guidelines and submit their manuscripts online through Submittable between October 1 and November 30, 2017.