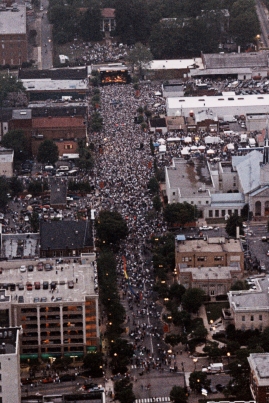 Were you there? Twenty years ago Widespread Panic held what became the largest record release party ever for their album Light Fuse, Get Away. Just in time for the anniversary this April, we’re releasing Gordon Lamb’s new book on this epic event, Widespread Panic in the Streets of Athens, Georgia.

Join us for the book launch at Cine Athens on April 17 to celebrate!

Where: Ciné, 234 W. Hancock Avenue
When: Tuesday, April, 17; 6 PM for the reception and reading; 7:30 PM screening of the concert film
How Much: Free with RSVP
Important: Admission is free but seating is limited. RSVP on our Facebook page or send us an email to press@uga.edu if you plan to bring extra folks.

We will have a reception in the Ciné Lab, catered by The National and copies of the book will be for sale by Avid Bookshop.

Former Athens Mayor Gwen O’Looney will introduce Gordon for a quick reading, to be followed by a Q&A. Afterward, relive the day and watch a free screening of the concert film. We hope to see you there!

“Gordon Lamb digs into an overlooked moment in Athens civic history, places it in cultural context, and unearths the idiosyncrasies of a small Southern college town.”
—André Gallant, editor in chief, Crop Stories

“Gordon Lamb’s Widespread Panic in the Streets of Athens, Georgia gives us an in-depth view of how this particular day and concert permanently changed Athens from a cultural, musical, and political perspective. This book tells the story of how this major concert came to be, giving the behind-the-scenes story of how this event that seemed to ‘just happen’ actually involved quite a lot of hard work and planning.”
—Annie Zeleski, contributing writer for the A.V. Club

In April 1998, legendary southern jam band Widespread Panic held a free open-air record release show in downtown Athens, Georgia, its homebase. No one involved could have known that the predicted crowd of twenty thousand would prove to be nearly five times that size. The ultimately successful show, now known as “Panic in the Streets,” went on to become a cult favorite of Panic fans and a decisive moment in Athens music history. This event still holds the record for the world’s largest record release party, but the full story of how the event came to be has not been told until now.

Widespread Panic in the Streets of Athens, Georgia places readers at the historic event, using in-depth investigation and interviews with the band, city officials, and “Spread Heads” who were there. Told as much as possible in real time, music journalist Gordon Lamb’s narrative takes the reader from conception to aftermath and uncovers the local controversies and efforts that nearly stopped the show from happening altogether.

This deeply researched and richly sourced book follows every stage of the concert’s development from the spark of an idea to approximately one hundred thousand people from all over the world packing the streets of a legendary music town. Taking us back to 1990s Athens through vibrant, on-the-scene writing, Lamb gives us the story of a band on the verge of greatness and a town reckoning with its significant place in music history.