Today is day two of the University Press Week (#UPWeek) Blog Tour. The theme is “Politics,” and we are looking at two books that seek to define southernness in a time of political and social upheaval. By understanding the politics behind our history, we understand not only the politics of today but also the social, economic, and cultural effects.

Both books come from the Politics and Culture in the Twentieth-Century South series, which presents the best new research on a range of topics in recent southern history, including the long battle for equal civil rights for all citizens, partisan political realignment, suburbanization and the rise of car culture, changes in gender and sexual cultures, the rise of theocratic politics, industrialization and deindustrialization, immigration, and integration into the global economy of the twenty-first century: fresh scholarship that investigates new areas and reinterprets the familiar. 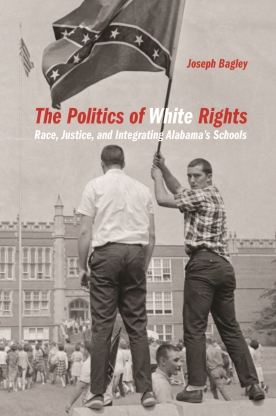 In The Politics of White Rights, Joseph Bagley recounts the history of school desegregation litigation in Alabama, focusing on the malleability and durability of white resistance. He argues that the litigious battles of 1954–73 taught Alabama’s segregationists how to fashion a more subtle defense of white privilege, placing them in the vanguard of a new conservatism oriented toward the Sunbelt, not the South.

Scholars have recently begun uncovering the ways in which segregationists abandoned violent backlash and overt economic reprisal and learned how to rearticulate their resistance and blind others to their racial motivations. Bagley is most interested in a creedal commitment to maintaining “law and order,” which lay at the heart of this transition. Before it was a buzz phrase meant to conjure up fears of urban black violence, “law and order” represented a politics that allowed self-styled white moderates to begrudgingly accept token desegregation and to begin to stake their own claims to constitutional rights without forcing them to repudiate segregation or white supremacy.

Federal courts have, as recently as 2014, agreed that Alabama’s property tax system is crippling black education. Bagley argues that this is because, in the late 1960s, the politics of law and order became a politics of white rights, which supported not only white flight to suburbs and private schools but also nominally color-blind changes in the state’s tax code. These changes were designed to shield white money from the needs of increasingly black public education. Activists and courts have been powerless to do anything about them, because twenty years of desperate litigious combat finally taught Alabama lawmakers how to erect constitutional bulwarks that could withstand a legal assault.

In the introduction, Bagley writes:

White resistance in Alabama did not flare and fade with the protest campaigns of the 1950s and 1960s, as the backlash narrative suggests. The disciples of law and order simply rejected the counterproductive resistance perpetrated by a violent minority, in order to allow a nonviolent white majority to take command. This ultimately undermined the direct action movement and helped preserve white privilege by protecting white money, white property, and the white rights to freedom of choice and freedom of association. White flight substantially diluted Brown’s impact directly, and the Lid Bills and more recent legislation have frustrated the quest for social justice and equal educational opportunity more broadly.”

The Politics of White Rights will be available for purchase on December 15, 2018.

The South of the Mind: American Imaginings of White Southernness, 1960–1980 by Zachary J. Lechner

In this interdisciplinary work, Zachary J. Lechner bridges the fields of southern studies, southern history, and post–World War II American cultural and popular culture history in an effort to discern how conceptions of a tradition-bound, “timeless” South shaped Americans’ views of themselves and their society’s political and cultural fragmentations. Wide-ranging chapters detail the iconography of the white South during the civil rights movement; hippies’ fascination with white southern life; the Masculine South of George Wallace, Walking Tall, and Deliverance; the differing southern rock stylings of the Allman Brothers Band and Lynyrd Skynyrd; and the healing southernness of Jimmy Carter. The South of the Mind demonstrates that we cannot hope to understand recent U.S. history without exploring how people have conceived the South, as well as what those conceptualizations have omitted.

In the 1960s and 1970s, white southern cultural identity didn’t necessarily translate into a single political identity. Much of the reason for that has to do with the fact that Americans of all regions perceived and invoked “southernness” differently, which led them to formulate southern identity (or identities) in the service of varying political aims.

Many counterculturists and George Wallace voters, for example, agreed that white supremacy was a core aspect of southern identity, yet hippies, in their desire to tap into the “authenticity” of the rural white South, argued that the region’s bigotry was merely symptomatic of the racism infecting the rest of the country. In contrast, the Michigan janitor who, in 1968, said he liked Wallace because he thought the former Alabama governor “would crack the whip on the Negroes” clearly saw white southern racism as a trait worthy of national emulation, not a stain that needed to be explained away. As you can see, even when Americans could agree upon aspects of white southern identity, it didn’t necessarily lead them to the same political conclusions.

Even though The South of the Mind is not principally a study of the politics and culture of the South, it’s an excellent fit for this series because it recognizes, like many of the other books in the series, the changing face of the South in the twentieth century, as well as the need to study the region to gain a deeper understanding of the broader history of the United States.”

This post was a part of the #UPWeek Blog Tour by member presses of the AAUP. You can visit today’s posts by our colleagues from other presses at their websites here: