Welcome to Georgia Reads, a virtual book club launched in partnership between Georgia Public Broadcasting, the University of Georgia Press, and Georgia Humanities. Each year a different book from UGA Press will be selected covering a range of topics from history, politics, culture, and biography to the environment. You’ll find book information here or GPB’s website, author interviews from GPB, plus news of live events with the authors and other ways to interact through social media.

Commemorating the 50th anniversary of the infamous Dixie Mafia contract killing, this fall’s Georgia Reads selection is Alone among the Living by G. Richard Hoard 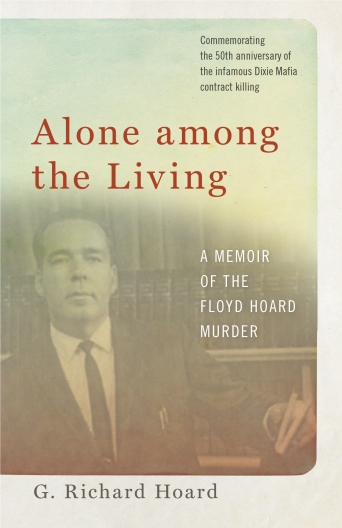 “When I was twenty I came face to face with the old man convicted of paying five thousand dollars for the murder of my father.”

From the gripping first line of this true story, you will follow a young man’s journey through grief and despair to acceptance and forgiveness. Summoning the memories of the events surrounding the August 7, 1967, car bombing of Jackson County, Georgia, prosecutor Floyd “Fuzzy” Hoard, Alone among the Living is G. Richard Hoard’s remembrance of the father he lost that day and his subsequent struggle to come to terms with the murder.

G. Richard Hoard is a graduate of the University of Georgia and Asbury Theological Seminary. An award-winning author, his books include: The Race Before Us, Through Fear of Death, and The Missing Boys. He and his wife, Candise, make their home near Athens, Georgia.

Praise for Alone Among the Living

“This extraordinary book is eloquent testimony to the power of forgiveness. In its craft, its compassion, and its humanity, Alone among the Living is more than a wonderful book. It is simply magnificent—a book of lasting value.”
—PHILIP LEE WILLIAMS, author of A Distant Flame

“An important book about one of the most tragic events in Georgia’s history. This personal account not only documents the key events surrounding the murder of a respected lawman, but also captures the angst of a young man whose life was forever changed by those events.”
—Jackson Herald

“Hoard was fourteen when his father, the district attorney in a small Georgia community, was killed by a local bootlegger. . . . This book is in part a reminiscence of 1960s small-town life, but only in part. At its core, it is a chronicle of grief and anger and confusion as Hoard tries to come of age without his father’s help. He wants to make his dead father proud of him but can’t understand the senselessness of what has happened. A compelling story of loss, acceptance, and forgiveness.”
—Booklist

“A book that movingly describes the loneliness, alienation, and anguish everyone feels at some point during their teenage years, albeit on perhaps a less intense scale. He writes of the longing for parental approval that continues even after a parent is gone. And he writes of the universal struggle to make sense of a world that often seems ruled by chaos and to find one’s place in it.”
—Athens Banner-Herald

Resources for booksellers and book clubs

Download the Readers Guide for Alone among the Living